In honor of Teddy Roosevelt’s birthday, we are taking a look back at the origins of one of the world’s favorite toys; the Teddy Bear, a quiet and cuddly friend to children for generations. But do you know where the Teddy Bear got his name?

President Theodore Roosevelt was invited to go bear hunting in November of 1902 by Mississippi Governor Andrew H. Longino. The hunting party hunted in the woods near Onward, Mississippi. When the President, a noted sportsman and accomplished big game hunter, had not located a bear, the hunting party decided to take matters in hand. His assistants cornered a black bear and tied it to a tree. All President Roosevelt had to do was fire a single shot to bag his trophy. But Teddy Roosevelt was offended by the lack of sportsmanship in this enterprise, and refused to take his shot.

Of course, the public loved this story.

Teddy Roosevelt was a dashing figure, well known for his years as a Rough Rider. His romantic writings about the American wilderness helped to inspire the creation of our system of National Parks. His steadfast insistence on sportsmanship on the hunt inspired newspaper articles and a famous cartoon by cartoonist Clifford Berryman.

According to history.com, what came next was a national toy craze:

Inspired by the cartoon, Brooklyn, New York, shopkeeper Morris Michtom and his wife Rose made a stuffed fabric bear in honor of America’s 26th commander-in-chief and displayed it with a sign, “Teddy’s bear,” in their store window, where it attracted interest from customers. After reportedly writing to the president and getting permission to use his name for their creation, the Michtoms went on to start a successful company that manufactured teddy bears and other toys.

Meanwhile, around the same time the Michtoms developed their bear, a German company founded in 1880 by seamstress Margarete Steiff to produce soft toy animals began making a plush bruin of its own. Designed in 1902 by Steiff’s nephew Richard, who modeled it after real-life bears he’d sketched at the zoo, the mohair bear with jointed limbs debuted at a German toy fair in 1903. ()

“Teddy’s bears” were an immediate and enduring hit with children.

They even inspired their own book series about the Roosevelt Bears! Author Seymour Eaton expounded on the international adventures of two bear cubs. Read about these books and see their absolutely charming illustrations here: Roosevelt Bears 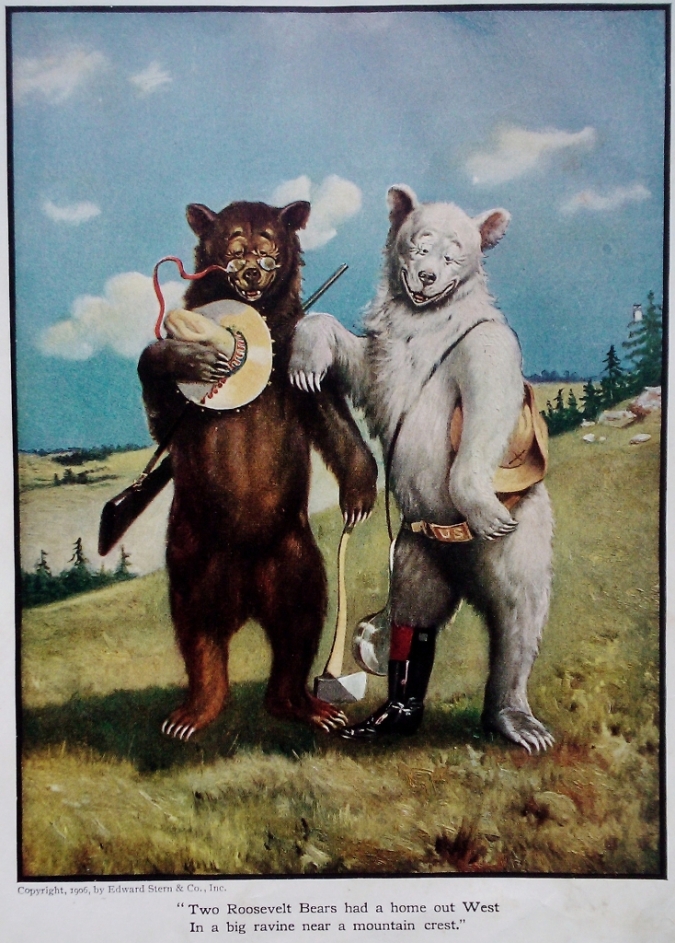 Teddy bears remain one of the world’s favorite toys, and here at Pendleton, we have our own favorites. Our Teddys are National Park Teddys, to honor the president and the parks he helped inspire. We currently have bears for Grand Canyon and Badlands parks.

We love their park-stripe hats and mufflers, their huggable tummies, but most of all we love their floppy feet. You can learn more about our bears here: Pendleton Teddy Bears

And happy birthday to the old Rough Rider himself!