Circa 1915  – A bunting-draped storefront celebrates the Fourth of July.

We’re excited about the Grand Re-Opening of our Seaside, Oregon Pendleton store this June–June 15th to be exact. But did you know that Pendleton Woolen Mills opened its first retail operation in Seaside, Oregon, in June of 1910?

The store, our very first, was open for “the season”: June through August. Young Chauncey Bishop oversaw the bustling operation that featured an array of products from the mill. From 1912 – 1918, The Pendleton Store continued under the supervision of D. E. Bowman. In 1919, management passed to Walter Jackson, an ailing office manager at the Pendleton Mill. Jackson and his wife ran the store for only one season before he passed away. His wife, Effie Jackson, ran the store ably through the summer of 1920, but elected to stay home with her son when it was time to open the store for business in 1921.

The Seaside Pendleton Store continued to prosper throughout the Roaring Twenties. It closed in 1928. In 2007, Pendleton opened again at Seaside. The current store is located at 1111 N. Roosevelt Drive, #410, Seaside, Oregon, 97138. You can call 503-717-1692 for hours. We’ve just given the interior a new look. Visit us soon to see it all, and to enjoy Seaside the town, the last stop of the Lewis and Clark Trail.

Trips to the Pendleton Archives always yield something of interest, as far as company history. This letter from Fannie Kay Bishop to her sons Clarence and Roy showed her keen interest in Pendleton Woolen Mill’s new retail operation in Seaside, Oregon. 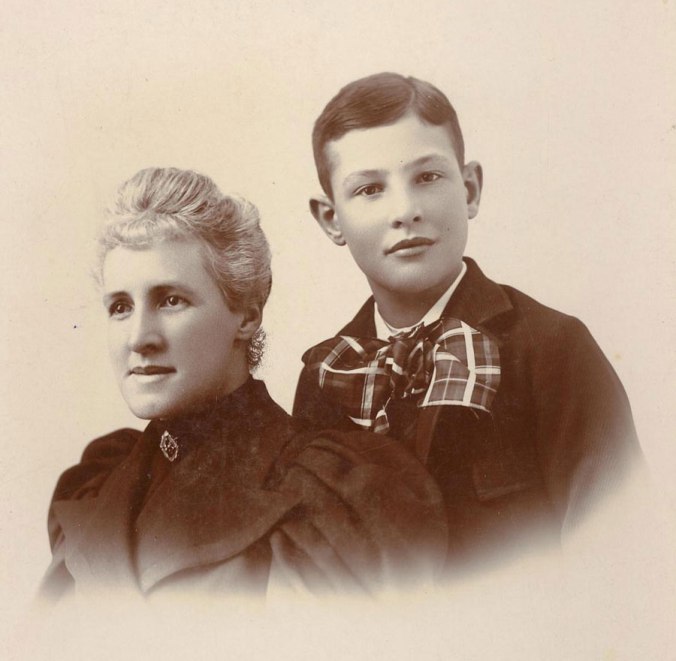 Fannie Kay was her father’s protégé, and learned about the wool business by his side while he ran the Thomas Kay Woolen Mill in Salem, Oregon. Of her siblings, she was by far the most interested and knowledgeable about the wool trade, but upon her father’s death, the business was left to her brothers. She turned her considerable energies to the raising of her sons. But it was Fannie Kay who saw the possibilities in a shuttered mill in Pendleton, Oregon, and who urged her sons to re-open it to found Pendleton Woolen Mills. Without her, there would be no Pendleton Woolen Mills!

In the following letter, Fannie Kay was discussing the Seaside operation with her sons, Roy and Clarence. The “exhibitions” she referred to were exhibitions at the coming 1911 centennial of Astoria, Oregon. The “Bowman” to whom she referred was D.E. Bowman, a PWM salesman who oversaw the store opening.

To quote, “Bowman has the goods arranged very nicely.  The front windows are not in yet. I suppose they they (sic) will arrive from Portland today. I hope he will do a good business.” She needn’t have worried. The store, open each summer between 1910 and 1928, did a booming trade in Pendleton goods.

My dears Clarence and Roy,

I came up here today to attend the Chattaqua and meet your father on the 10:45 train. I received a letter from him yesterday stating he would be in Portland on the 12:30 pm train. I wrote for him to come down this evening. He could leave Portland at 6:15. I hope he will come. I want to see him so much.

Bowman* has the goods arranged very nicely.  The front windows are not in yet. I suppose they they (sic) will arrive from Portland today. I hope he will do a good business. But the season is very late. Yesterday and today have been bright and warm.

I want to see you so very very much. And hear all about your trip and what you think of conditions. Write to Grandmother Kay – she is quite feeble and often speaks of you boys and wants you to write. I am real well here. Your father and I will go to Astoria next week and make what arrangements are necessary for the exhibitions**.

I received a nice letter from Ruth today and will send it.

I hope that you boys are well – be careful to not get overheated. Take things reasonable easy.

With much love to both –

We hope you’ll come visit the new Seaside store, where graphics and a timeline go into the shared history of Pendleton and Seaside in more depth. The town sits at the end of the Lewis and Clark Trail. You can feel the history all around you, and since Seaside began as a resort, what you feel is the history of fun.  The Natatorium is no more–the waters of the Oregon coast are so cold that an indoor swimming pool was a huge draw–but the town is full of things to do, like the Seaside Aquarium, the Carousel Mall, Bumper Cars, and the historic Funland Arcade.

Here are a few images of the old Seaside–come see the new one for yourself! 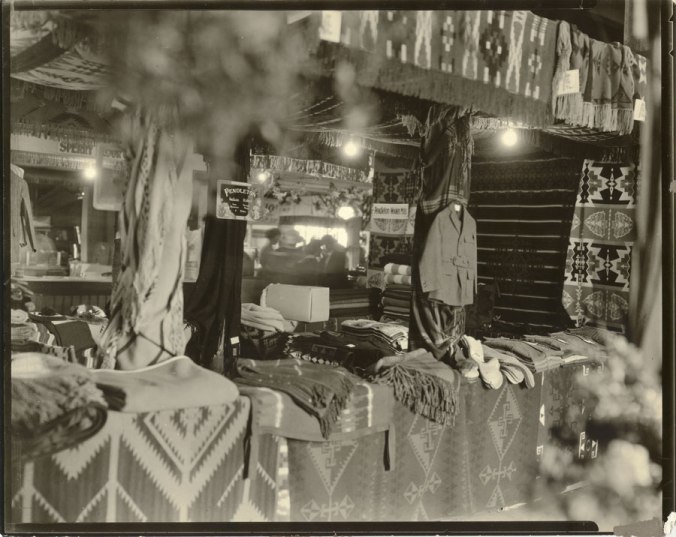 Circa 1911 – An interior view of the store features blanket-draped daybeds. The blanket in the center of the photo was brought back as the Saguaro Blanket in our Heritage Collection, and again as a Muchacho blanket in three colors. All are currently retired.

Circa 1911 – Note the rack of wool skeins and basket of knitting needles and crochet hooks. All floor rugs and fringed rugs are Native American weavings.

Seaside postcard – A hand-tinted version of the photo above was transformed into a postcard that helped tourists commemorate their visit to the Seaside Pendleton Store.