Blanket Stripes: The rich hues of Zion’s red rock formations in rusty red, ochre, and tan are lit by the clear brilliant blue of the afternoon sky in Utah’s desert wonderland.

Zion Park is a geographical wonderland full of formations and features, all part of a super-sequence of rock units called The Grand Staircase. According to Wikipedia, in the park you’ll find:

…the Temple of Sinawava, which is named for the coyote god of the Paiute Indians…and the Zion–Mount Carmel Tunnel [which] ends at Mount Carmel. On the east side of the park, notable park features include Checkerboard Mesa and the East Temple.

The Kolob Terrace area, northwest of Zion Canyon, features a slot canyon called The Subway, and a panoramic view of the entire area from Lava Point. The Kolob Canyons section, further to the northwest near Cedar City, features Tucupit Point and one of the world’s longest natural arches, Kolob Arch.

Other notable geographic features of Zion Canyon include Angels Landing, The Great White Throne, the Court of the Patriarchs, The West Temple, Towers of the Virgin, the Altar of Sacrifice, the Watchman, Weeping Rock, and the Emerald Pools.

With 4.3 million visitors per year, this is a park to celebrate! 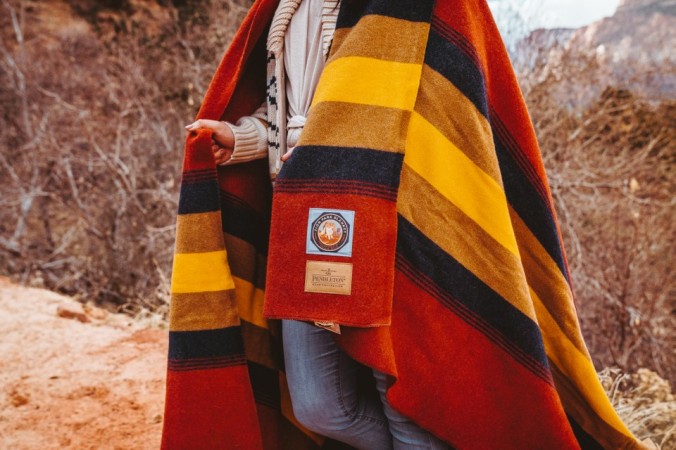 The Zion National Park Pendleton blanket features navy, ochre and goldenrod stripes on a brick red background. “We were really inspired by the bold stripe design of a version of the blanket from the 1950s,” says Amanda Coppa, senior merchandise manager of the home division at Pendleton. “The colors were drawn from the beauty and landscape of the park! We had to emphasize the deep red that Utah and Zion are known and loved for.”

Our label features a mountain lion, also known as a cougar, part of the wildlife that lives in Zion’s varied life zones (desert, riparian, woodland, and coniferous forest). Animals range from the petite kangaroo rat (which is adorable, and resembles a very leggy gerbil) to enormous yet agile bighorn sheep. Mule deer, foxes, bats, and rock squirrels are often seen by the park’s visitors, and close to the ground, the amazing variety of rodents draw the park’s birds of prey, which include the California Condor, the Mexican Spotted Owl, and the Peregrine Falcon. All told, Zion is home to over 78 species of mammals, 291 species of birds, 37 species of reptiles and amphibians, and 8 species of fish.

Label: As the sun sets, a solitary mountain lion pauses before the towering sandstone of the Great White Throne.

Our friend and brand ambassador, photographer Kristen Frasca, was able to take the Zion blanket home to its park for the photos in this post.

Thanks to her for these gorgeous photos, especially this last one, where her Husky dog is almost more commanding than the scenery! If you’d like to see more of Kristen’s work, please visit her Instagram page: https://www.instagram.com/kristenfrasca/

You can see the blanket and more at our website: Zion National Park by Pendleton

Every year, we retire some of our blanket designs to make room for more. This year, we have some beautiful blankets saying good-bye. You’ll find neutral geometric designs that have become so popular, like Beargrass Mountain and Santa Clara. You’ll also find the bold and colorful geometric designs for which we are so well-known, like Arrow Revival and Eagle Gift. Baby blankets, knitted throws, collaborations and so much more—take a look!

Below are some favorites that you won’t want to miss, all woven and manufactured in the USA in Pendleton’s Pacific Northwest mills.

This contemporary pattern also comes in a throw that features a central Greek cross.

North, South, East, West; these are the Cardinal Directions, immortal points on the compass. In this contemporary pattern, each arm of the Greek cross reaches toward one of Earth’s Four Corners, pointing the way to wealth, knowledge and relaxation. Sailors traveled North on high waves to fish the icy waters, South to breathe the balmy air of the Tropics, East to load their ships with profitable trade goods and West to encounter new lands, new dangers, new opportunities. The compass points guide every ship’s journey, showing a path to adventure. 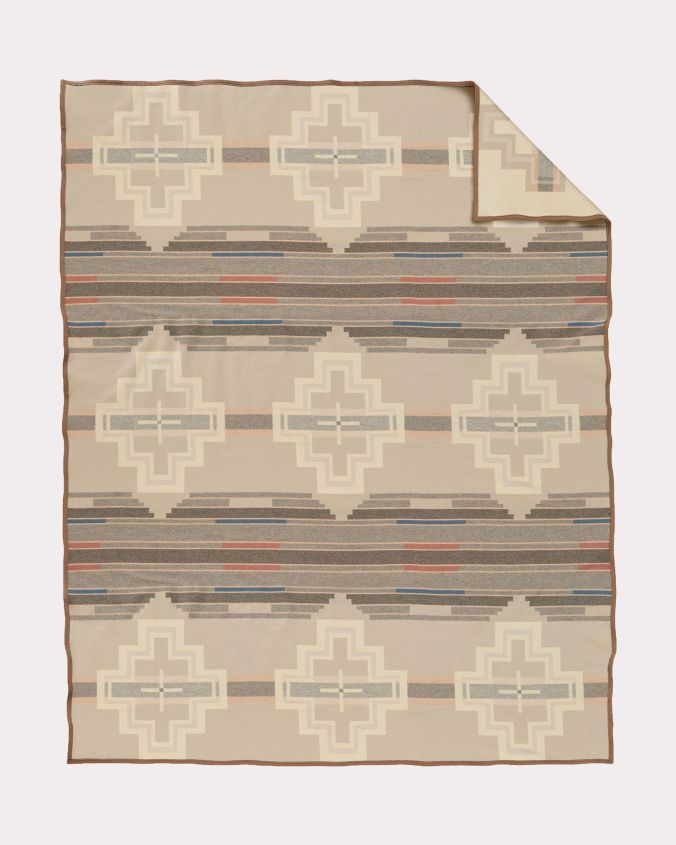 In 1777, Franciscan padres established Santa Clara Mission in California’s fertile Santa Clara valley. It was supported through the labors of the Tamyen, Ohlone and Costanoan peoples. When the mission system ended, Santa Clara Mission continued to serve as a place of worship. The church was destroyed three times, but has always been rebuilt. In 1926, the current structure was constructed with the distinctive architecture and subtle stucco hues echoed in this design.  Today, Mission Santa Clara de Asís serves as the chapel on Santa Clara University campus.

This pattern has been a hit in our Baggu collaboration!

Southern Highlands celebrates the traditional craft of wool coverlet weaving as practiced by the women of the Appalachian region of the Southeastern United States. Appalachians settled in remote hills and valleys, and survived by hunting, gathering and small-scale agriculture. Their rustic cabins were filled with objects made from materials at hand.  For coverlets, women grew flax and cotton on the same property where sheep were raised for wool. Hand-carded and spun, with dyestuffs derived from walnut shells, indigo and other colored flora, coverlets were hand-loomed in the four-harness overshot method. Traditional colors were blue, red and green, woven on a white or cream warp. Patterns range from circles to intricate geometric eye-dazzlers. The woven coverlet inspired great artistry in Appalachian weavers. Today, their work is admired and preserved in museums and collections across the country.

It’s hard to say farewell to this one; Hacienda is a popular blanket that has been in the line for a decade. 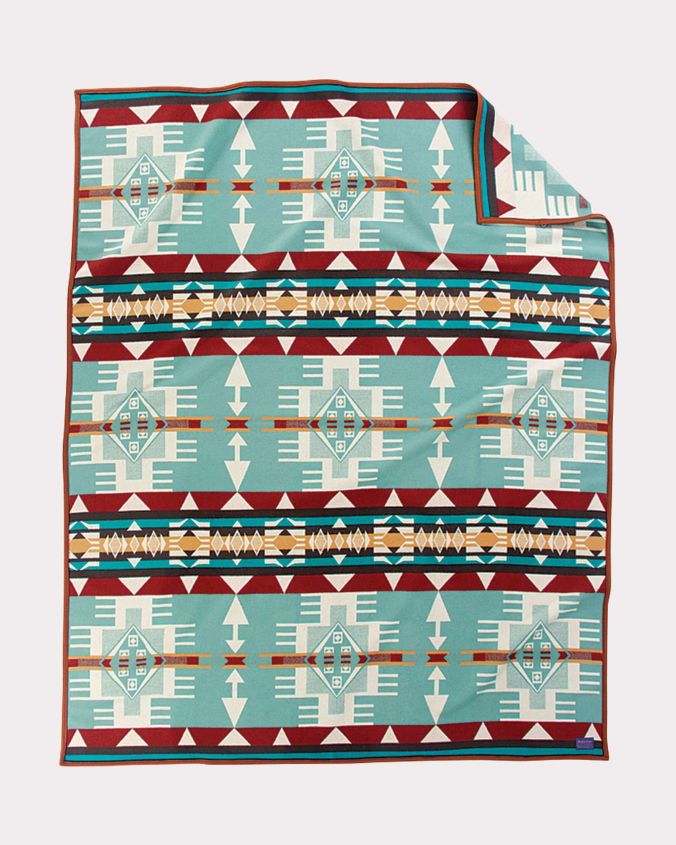 Timeless geometric shapes give universal appeal to the nine-element design in this USA-made wool blanket. The stripes, crosses, triangles and diamond motifs in this pattern are interpretations of the symbols common in many early Navajo blankets. Crosses represent completeness and the four directions: North, West, South and East. Arrows signify movement, power and life force. Like traditional Navajo designs, this pattern continues to the edges of the blanket to prevent evil spirits from being trapped within.

The great Plains Bison is the star of this blanket, one of many we’ve woven to celebrate the buffalo.

This design honors a time when millions of bison roamed North America’s grassy plains. Today our National Parks protect the last remaining wild herds. One of the largest herds of free-ranging wild buffalo lives in Yellowstone National Park. It’ thought to be the only place in the United States where bison have lived continuously since prehistoric times. You can also see herds in Badlands, Grand Teton, Theodore Roosevelt and Wind Cave National Parks.

This design plays on the luminous combination of blue and orange. Learn more about the artist behind the blanket here: Starr Hardridge 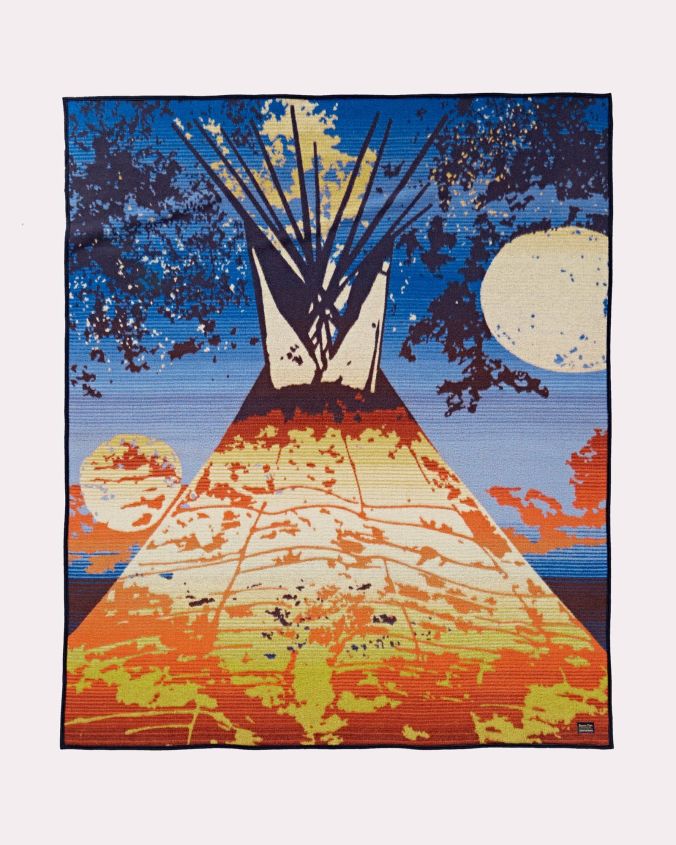 A USA-made wool blanket created in partnership with artist Starr Hardridge. This design illustrates the relationship between humankind, Mother Nature and the creator of the universe whose medicine is love. It acknowledges our place between the sun and the full moon. Part of our Legendary Collection, this design honors stories and symbols of Native American cultures.

So get them while they’re here—they are saying good-bye soon! 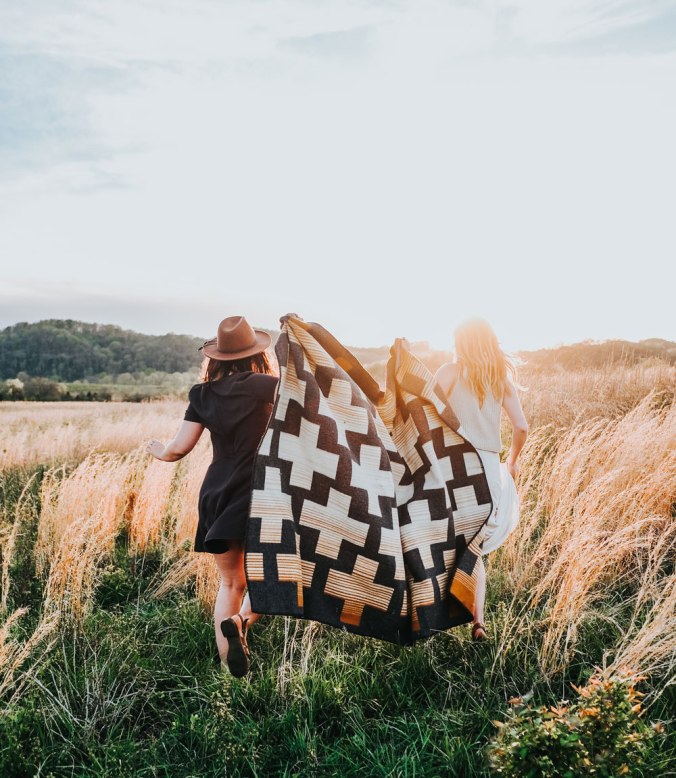 We are celebrating the Summer Solstice and the beginning of Summer with Kristen Frasca, one of our newest brand ambassadors. Kristen is a jewelry maker, graphic designer and photographer based in Nashville, TN. She has impeccable style, which shows in these summery shots.

Nothing says summer like a picnic. It’s the perfect way to relax in nature; spread a blanket, unpack your feast and toast to the months ahead. 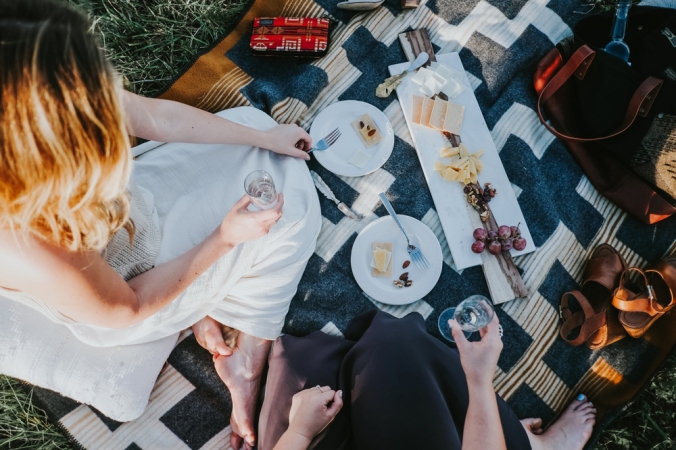 Our picnic is happening on one of our new blankets for 2017–the Compass Point throw, which coordinates with the Compass Point bedding collection. This USA-made wool throw features a contemporary design in neutral hues, anchored by a repeating pattern of crosses. Each arm of the Greek cross reaches toward one of earth’s four corners, pointing the way to adventure, wealth, knowledge and relaxation. The Compass Point bed blanket is beautiful, too! 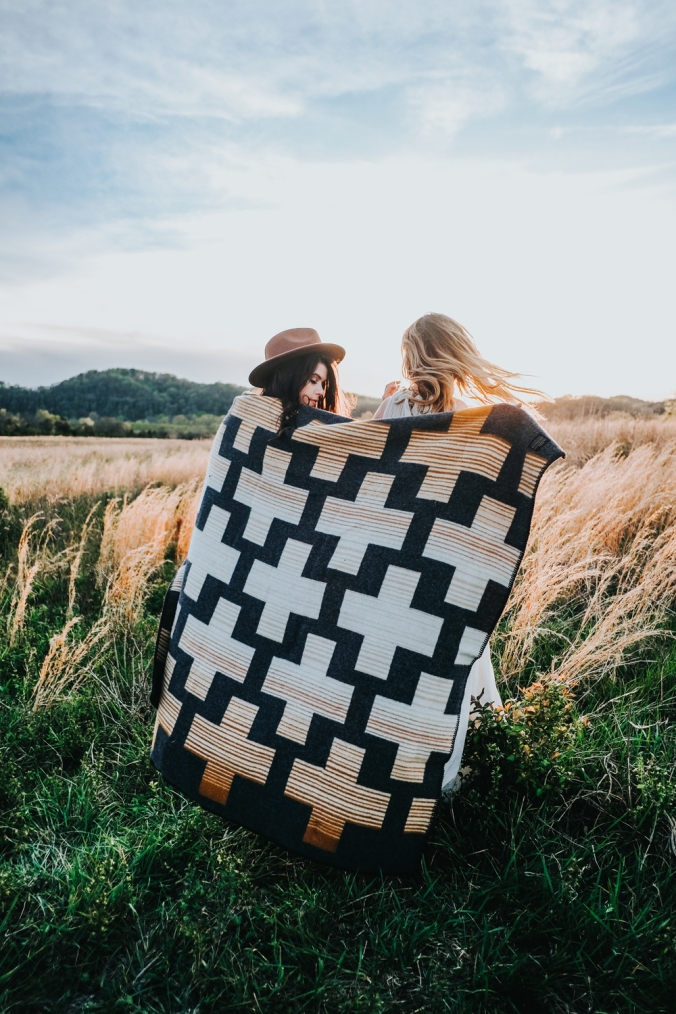 We’re always surprised when people say they’d never picnic on a Pendleton blanket. It takes some shaking out, but it’s actually good for your blanket to use it. It’s the best way there is to avoid moth damage. Wool blankets are thick, protective, insulating, and most spills bead up and shake right off, thanks to lanolin and the other amazing and natural properties of wool.

And for those of you who are worried about dampness, you can always check out our Pendleton roll-up blankets. These are backed with water-resistant materials.

Yes, Pendleton Hats are a perfect way to keep the summer sun out of your eyes. We have some fabulous new hat styles at the link, in colors you’ll love. 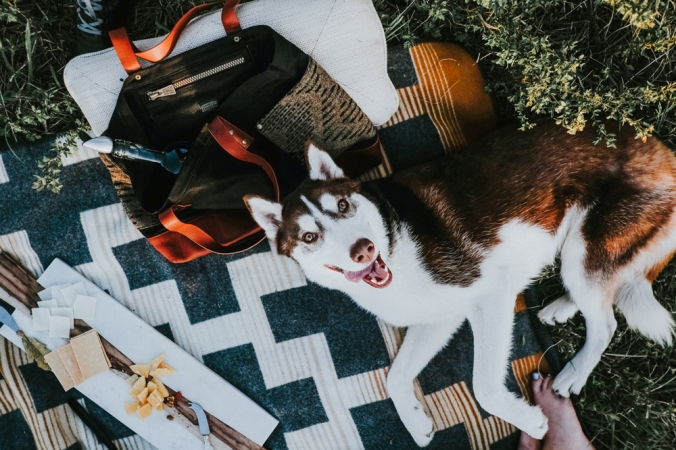 Hey there, goofy girl. This is Kristen’s Siberian Husky, Winter. It’s fine to crash the picnic when you’re this friendly and cute. And the Escondido Tote is a sophisticated and roomy tote that will hold everything but the dog, of course.

And now, let’s talk about that beautiful wrap. It’s the perfect summer layer; a Featherweight Scarf, generously sized, light-as-air in soft, silky mercerized wool in our Acadia National Park stripe. It is sizable enough to wrap you head-to-foot with the softest layer of smooth, airy wool. It’s also completely easy to wear around your neck, due to the whisper-thin fabric. It’s also available in Yosemite National Park Stripe–giving you a stripe for each coast.

So, welcome Summer! We wish you months of adventures.

You can see more of Kristen’s work here:  www.kristenfrasca.com