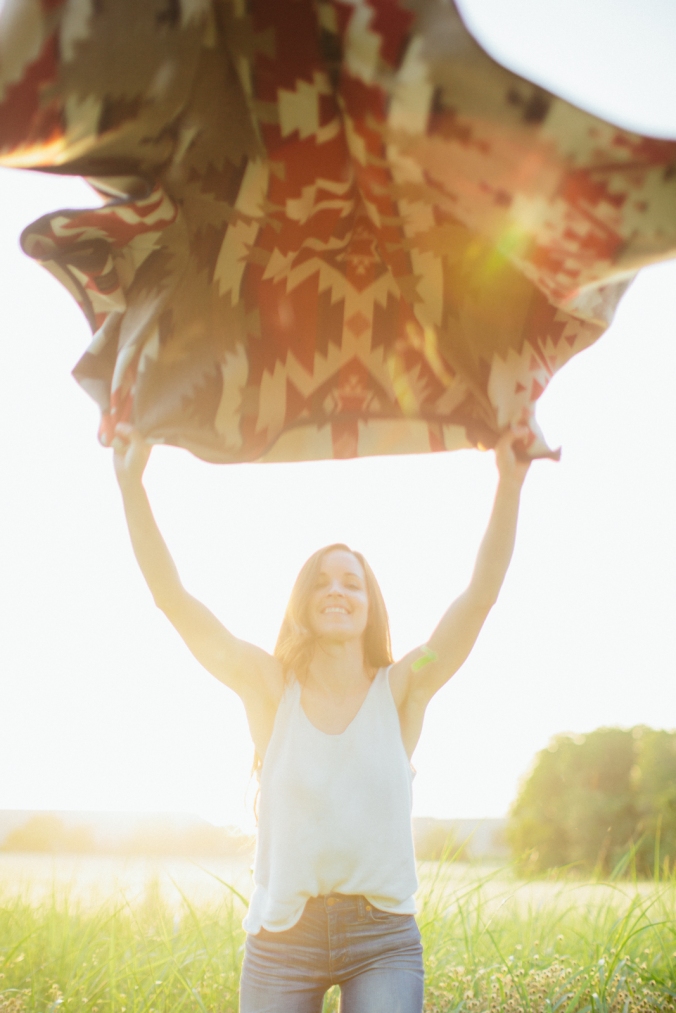 Here are some beautiful blankets that summon the patriotic spirit of this Independence Day.

Inspired by Navajo hand weaving created in the Southwest in the early 20th century, this pattern incorporates symbols of hope, abundance and successful journeys. Muted colors and mountain-like steps evoke sunset over a western landscape.

“O say can you see by the dawn’s early light.” These words were penned on the back of an envelope in 1814 by young lawyer and poet Francis Scott Key. Key was held captive on a Royal Navy ship as British ships in Chesapeake Bay bombarded Fort McHenry throughout the night. When dawn broke, the fort was still standing, the American flag still waving. It was a turning point in the war of 1812, and the birth of our national anthem, the “Star Spangled Banner.” This blanket, woven in our American mills, commemorates the Bicentennial of that momentous morning in U.S. history. Fifteen red and white stripes and stars represent those on the flag at that time. Each star is shaped like an aerial view of the fort, which was built in the shape of a five-pointed star. Striations and imprecise images give the design a vintage Americana look. 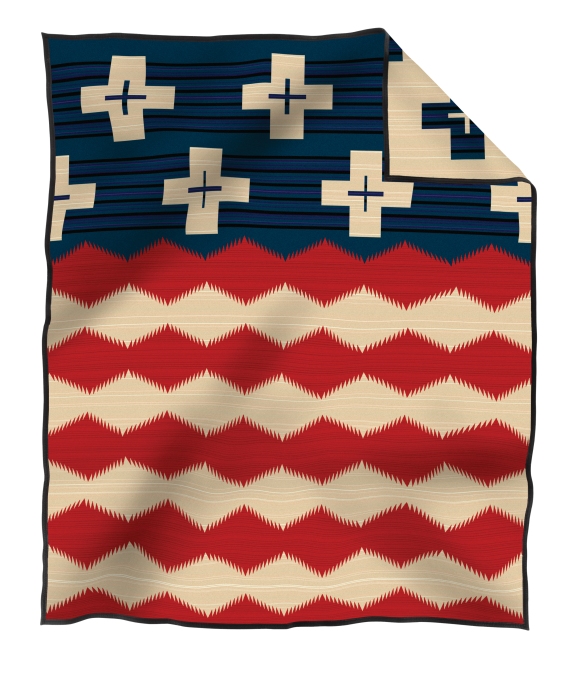 The Brave Star blanket  celebrates the patriotism of Native Americans who have defended our country in battles since the 19th century. The design, based on the American flag, marries modern asymmetry and vintage Americana. The unique striations reflect a time when dyes were made from plants.

The Code Talker blanket honors the crucial role played by Native Americans in defending our country during World War II by developing a code that could not be cracked, based on the Navajo language. Many have seen the popular movie “Windtalkers“,  but the actual history of the code talkers  is more riveting than any fiction.  You can learn more at their official site.  This blanket is officially retired as of 2012.

HOME OF THE FREE (retired) 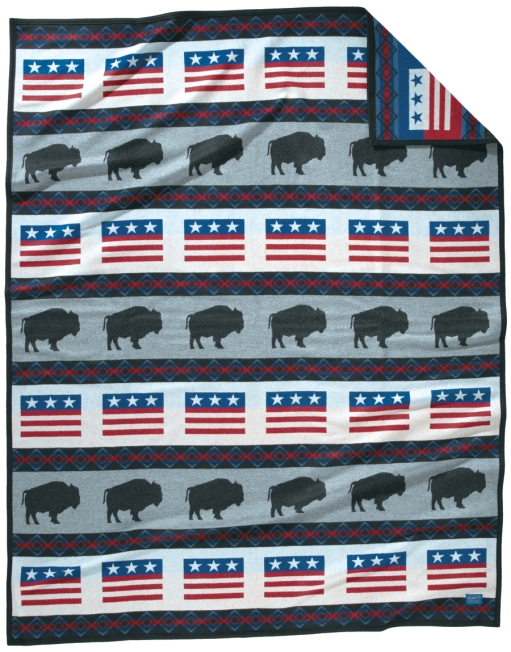 Home of the Free is an older retired blanket from the early 2000s. Roaming buffalo and the Stars and Stripes speak of the spirit of the West. If you are lucky enough to have one of these retired blankets, cherish it. This blanket is nearly impossible to acquire, as it spoke to so many Americans after the events of 9/11.

Our blankets are proudly made in the USA. Please visit one of our union mills   if you can, to see exactly how we produce our textiles and finished blankets.

And from our family to yours, have a safe and wonderful 4th of July.

We are reposting this previous entry this Memorial Day. Please note that the Grateful Nation Vest is currently available, thanks to the efforts of veterans like Chris Winters. Our respect and thanks to the men and women who have served in all branches of our military.

Cue Chris Winters, a Puyallup tribal member and veteran who understood that we were no longer making the vest, but wanted to know if we had fabric available. He sent photos of his own vest.

Said Chris, “I am on a Tribal committee and we not only wear Pendleton vests for ceremonies. ..we gift your native blankets to guests, elders, and returning warriors.” Chris is very involved in IUPAT, a Washington State organization that offers outreach, support and training for Native veterans. This group marches in local parades honoring servicemen in their Grateful Nation vests, decorated with the medals earned by veterans who have served our country.

We thought you’d enjoy seeing the vest worn in Tacoma, Washington area parades and ceremonies by Native veterans who have served our country well.

And thanks, Chris, for reaching out.

Here’s the blanket in the  IUPAT office.

More information below on the meaning of each service ribbon stripe.

A portion of every blanket’s sale goes to support the Fisher House Foundation and its mission to support the families of veterans. As their website states:

Fisher House Foundation is best known for the network of comfort homes built on the grounds of major military and VA medical centers nationwide and in Europe.   Fisher Houses are beautiful homes, donated to the military and Department of Veterans Affairs.  These homes enable family members to be close to a loved one at the most stressful time – during the hospitalization for a combat injury, illness or disease… Since 1990, the foundation has saved military, veterans and their families an estimated $200 million in out of pocket costs for lodging and transportation.