Quality Never Goes Out of Style

The Pendleton 49’er is a perfect illustration of the adage that quality never goes out of style. 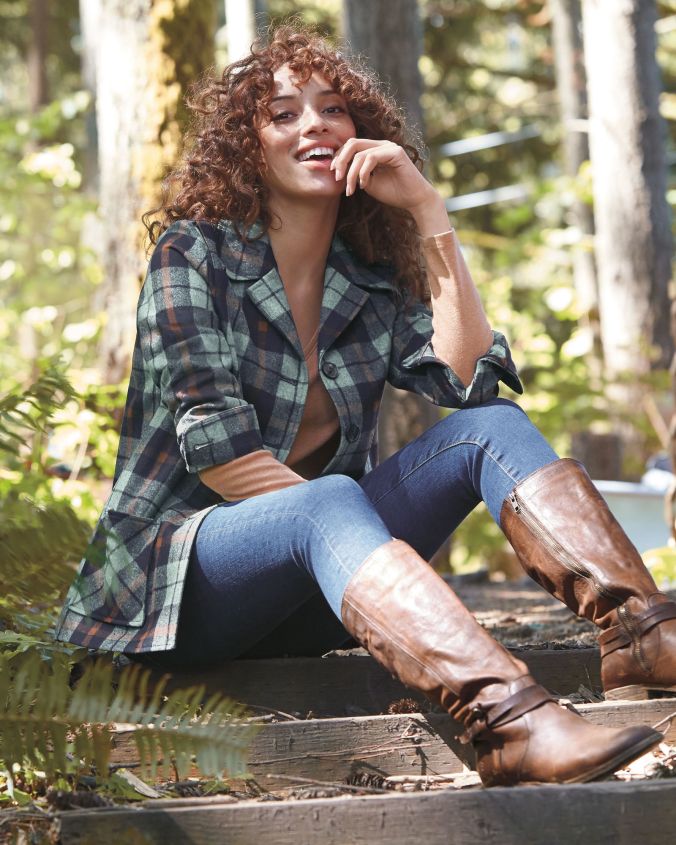 This American classic is still going strong after more than sixty years. But where did it come from?

The answer starts with the changes for women in World War II, when American women proclaimed, “We can do it.” This iconic WWII image was used in countless posters and bond drives during WWII. A serious woman dressed for hard work with her hair in a kerchief, the image still fixes us today, gazing out at onlookers over a flexed bicep.

She was a symbol of women stepping up to fill the need for factory workers during wartime, but she was also part of the emergence of one of Pendleton’s most enduring items of womenswear: the 49’er jacket.

Pendleton’s success with men’s shirts had happened twenty years earlier, but during WWII, men were not the only people enjoying distinctive plaids and ombres in pure virgin wool. Women began to borrow men’s work shirts for both work and warmth. It’s possible that by wearing their husband’s shirts, women kept the memories of their husbands, fiancés and brothers close, though many undoubtedly needed some serious work wear that was simply not available for women at the time. Whatever the reason, women loved Pendleton shirts.

In 1949, when market research identified an opportunity for sportswear for women, Pendleton entered the market with their first women’s line. This was a test offering of classic skirts, jackets and shirt, to test exactly how the American woman would react to a branded line of virgin wool sportswear. The positive response was resounding, but no one could have predicted the enormous success of a single garment introduced that year.

Says Linda Parker, head of Pendleton Communications, “The first women’s line in 1949 was composed of five items.  It is amazing to me that out of such a limited initial offering that the ’49er would develop such an immediate following and reputation.”  The jacket referred to both the year of its introduction, and the California Gold Rush, in a nod to Pendleton’s Western roots.

The designer was Berte Wiechmann, a young woman who came to Pendleton from Jantzen,  another iconic Portland apparel company. Miss Wiechmann sewed the original samples herself, taking styling particulars from the Pendleton men’s shirt. The ’49er jacket featured discreet tucking at the yoke, and two bias-cut patch pockets near the hem. The boxy cut showcased Pendleton’s famous plaids, and larger iridescent shell buttons softened the look.

Miss Weichmann was very particular about these buttons. She insisted on a special black shell from Australia and Tahiti, supplied by J. Carnucci & Sons, NJ.

Yes. You read that correctly. One hundred and fifty thousand dollars worth of buttons alone, in 1956.

The desirability of the ’49er was immediate, despite the introductory retail price range of $14.95 to $17.95. Says Parker, “We have many testimonials of how young women saved their babysitting and strawberry-picking money in order to buy a ’49er.  Women everywhere had it on their wish list of gifts.” The first consumer was the collegiate girl, who were in the grips of a menswear inspired trend. The ’49er was perfect over a white cotton dress shirt over “trews,” narrow wool pants.

The first print ad for the ’49er ad was done by Fred Love in 1950. A college girl in a MacLamond tartan ’49er pretends to ignore the cartoonish interest of the college boy behind her, snug and stylish in her ’49er. Love continued to illustrate the ads through 1951, when famed illustrator Ted Rand took over the job of communicating the Pendleton ’49er with ads that are still iconically beautiful. He changed the focus from the teenager to the woman, and incorporated elements of the Western landscape when he could.

The ’49er’s simple, casual styling continued to be a perfect fit for the emerging suburban lifestyle of post-war America. During the post-war years, it served as one of the easiest solutions for outerwear over all the Baby Boom baby bumps. Parker explains, “I personally think that Ted Rand shares some of the kudos for making the ’49er a household name with his inspired illustrations.” 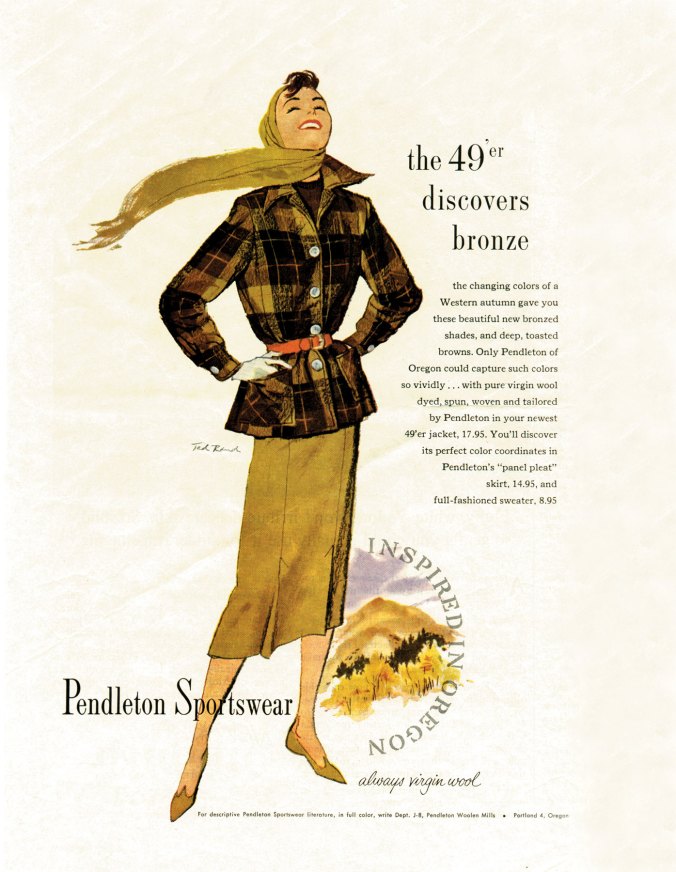 Ted Rand began illustrating Pendleton ads in 1953. His elegant women and echoes of the Western landscape moved the jacket from the campus to the suburbs, where it became the staple of a woman’s wardrobe. The popularity soared and knock-offs abounded, to the point where the company had to seek legal protection of the design. Yes, the ’49er is a patented jacket!

The earliest ’49er in the Pendleton archives is a red, yellow and chartreuse version owned by Mrs. Sarah Brourink, who sent it to our archives in the year 2000 after wearing it for 51 years. Here is a vintage example in the exact plaid.

In the years of its prime (1949-1961), over a million Pendleton ’49ers were sold to American women. And it continues to sell well now, after re-introduction in the early 2000s. Collectors still chase after the originals, and beautiful examples can be seen on elated bloggers. Our re-issues do extremely well whenever they are included in a Fall or Holiday line.  Whether in the arresting brights of a bold Buchanan tartan, or the shaded colors of a subtle ombre plaid, the silhouette is still unmistakable. Still made of 100% virgin wool woven in our USA mills, the ’49er works dressed up with a skirt and a belt, or dressed down with jeans. Like a good wool men’s shirt, it serves as a go-to second layer for the backyard or the office.

Fashion is fleeting, but style endures.

The Pendleton 49’er is a perfect illustration of that. 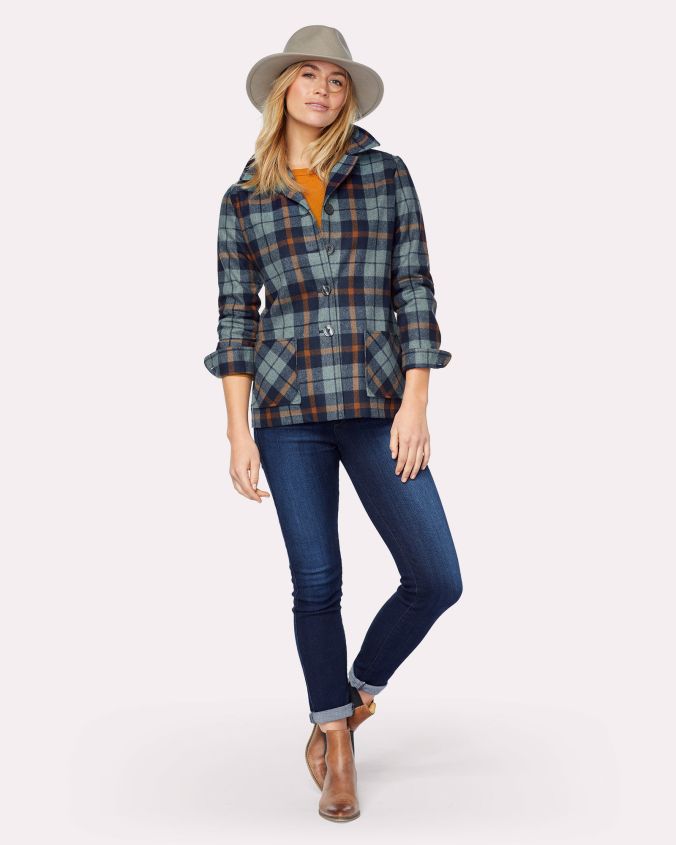