In 1928, Mickey Mouse made his world debut in the short film “Steamboat Willie.” Pendleton is proud to present a limited-edition collection of USA-made blankets, and fun gifts that celebrate the 90th birthday of this beloved American icon.

A throw-sized Mickey Mouse, as we first saw him in “Steamboat Willie”.

Mickey Through the Years:

This blanket features the many faces of the world’s favorite character, Mickey Mouse.

These blankets are joined by two spa towels; Mickey through the Years, and Mickey’s Salute, introduced last year.

One of our favorite additions? This boxed set of four Mickey Mugs, adorned with the blanket designs. These are just as sturdy & beautiful as our beloved oversized mugs, but a bit smaller.

These would make a fantastic gift as a set, or you can give one of each to your favorite fans of Mickey Mouse. 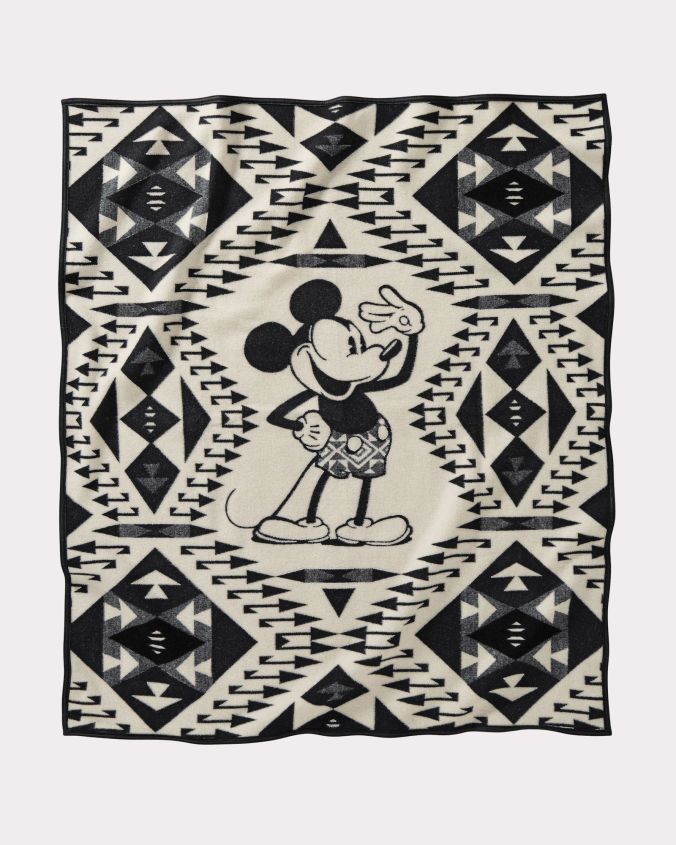 But why Pendleton and why Disney, you might as? Well, we go waaaaay back.

The history of Pendleton Woolen Mills and Disneyland began when Walt Disney extended a personal invitation to be retail partners in the Park. Walt was a fan of Pendleton’s “fleece to fashion” vertical manufacturing, which at the time included ownership of our own flocks and scouring facilities. He saw a fit for us in Frontierland as part of his vision of America’s Wild West.

We were more than excited to be part of Disneyland. Pendleton established a ‘Dry Goods Emporium’ that opened for business right along with the rest of the park on July 17, 1955.

The store was a rustic wonderland of Pendleton’s woolen products, along with belts, wallets, hats, and other Western-themed merchandise.

Much of the clothing sold in Disneyland had its own special labeling that featured the spires of Cinderella’s castle.

It seems that a new plaid Pendleton shirt was part of the vacation for many young men in America, and the store set a record for sales of Turnabout reversible skirts in the late fifties. Our Disneyland store was phenomenally successful. We had a unique way to share the bounty of the Disneyland store’s sales. Visitors were asked for their zipcodes, and credit for the purchase was awarded to their nearest Pendleton store back home.

It’s said that the family that plays together stays together. Well, what does a family who plaids together do? Whatever it is, this family from 1963 is doing it in Pendleton style.

1963 was the year that Clarence M. Bishop took his own Gold Ticket tour of Disneyland. The Bishop family is a hardworking bunch, and when they vacation, they tend to gravitate towards places where they can ride or fish. But Mr. Bishop had a great time in Anaheim, according to all reports.

(Please note, these are models, not members of the Bishop family, no matter what the ad campaign says)

We’re glad that a trip to the old store remains a favorite memory of so many of Disneyland’s long-time guests. We have been asked, “What happened?” by Disney guests who remember our store with nostalgia. The partnership dissolved amicably when the Disneyland Resort shifted their merchandising focus to more Disney-oriented goods. The store closed in April of 1990.

In our Heritage Hallway, you can find a framed letter from Walt Disney about the partnership, and a small bronze of Jiminy Cricket. The letter came to invite us to the official press and television premiere on July 17th, 1955.

The bronze was a gift to us from Disney. Jiminy stands on a matchbox wearing a medallion that says, simply, “30.”

The statue’s inscription reads: “PENDLETON WOOLEN MILLS in commemoration and appreciation of 30 years of association with DISNEYLAND 1955-1985”

We’re proud of our history with Disneyland, and want to say thanks to all the guests who have made us part of their visit.