“The Big Lebowski” turns twenty this year, and Dude, we still love it.

Two decades ago, this Coen brothers film was released to low to middling success, but quietly grew into a cult favorite. No one can pinpoint the exact reason why. Was it Donny’s clueless questions? Walter’s chin-strap beard? The German nihilists? The dream sequence scored by Kenny Rogers and the First Edition?

Well, it was probably a grand confluence of all of these important factors, plus the masterful turn taken by Jeff Bridges as The Dude. He staggers in and out of trouble, wearing alternately sweats, shorts, pajama pants, a bathrobe, a purple t-shirt and a battered Westerley cardigan.

Jeff Bridges wore his own clothes for this role, and though there were two sweaters hand-knitted as back-ups, he preferred wearing his personal Pendleton Westerley.

You may know it as The Dude’s cardigan or the Big Lebowski sweater, but we debuted the Westerley cardigan in 1974 as part of our High Grade Westernwear line.

The Westerley drew inspiration from beautiful Cowichan sweaters that are hand-knit by Pacific Northwest tribes. Our version was machine-knitted by Winona Knitting Mills of Minnesota, a two-facility company owned by the Woodworth family. Winona Mills was one of the very few USA knitting mills who offered a 2gg knit, a term meaning only two knit stitches per inch. A 2gg sweater is heavy enough to work as outerwear. As the long-time leader of our menswear division expressed it, “You could wear it in a monsoon, and you’d stay warm.”

The vintage Westerley was knit in 3gg, and it was almost as impressive as the 2gg for thickness and warmth. The Westerley was one cozy sweater. We offered it in the western, outdoor and casual lines for over ten years. Over its run of production, the zip front, ring zipper pull and shawl collar stayed the same, as did the Greek key-inspired pattern. Archival visits show that the Westerley’s color variations are surprisingly wide. 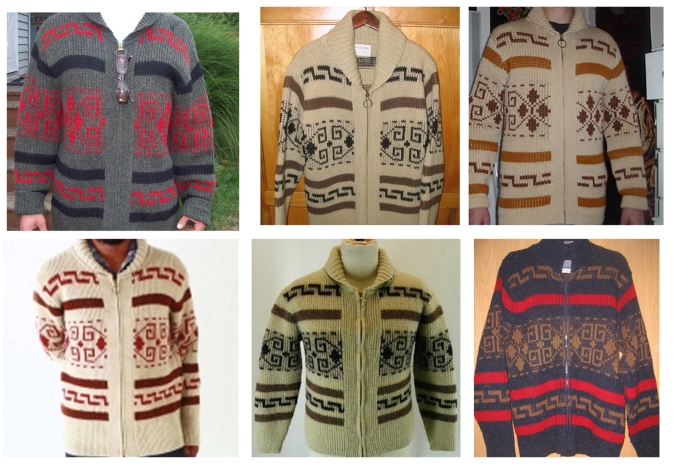 The sweater went out of production in the 1980s, but found the limelight in the early 2000s, thanks to an obscure movie that didn’t stay obscure.

Pendleton’s first run at reproducing the “Big Lebowski sweater” came in the Fall of 2011. The Dude Cardigan was not an exact replica. It had the weight and coloration of the original Westerley, with a slightly different knit pattern and a leather zipper pull. This homage sweater generated an enormous amount of publicity, especially because the sweater worn by Jeff Bridges in the movie was going to auction that same year. The provenance of the auction sweater came into question and it was withdrawn from auction. Pendleton’s version sold out almost immediately.

In Fall 2013, we brought back the sweater in the original 3gg knit under the Westerley name. We went to the archives, and settled on two versions: a cream with red and black pattern, and a desert brown version with navy and gold pattern.

We offered the Westerley in another archival coloration in charcoal and blue early in the fall of 2014.  These were all great Westerleys. They were beautifully made and selling well to fans of traditional menswear. We stand behind these Westerleys! But this was not the sweater the Achievers wanted, and the Achievers would not be denied.

We went back to the archives and studied the movie to capture the coloration as best we could for the version known as The Original Westerley.

This is 100% lambswool in 3gg knit, and it’s ready to take you through your next monsoon, or maybe to your next Lebowskifest. We restored the original stitch pattern to the placket, and attached a small bowling pin keychain. We think it really pulls the sweater together.

The Dude abides. And so does his sweater. Come see us in our stores, or order online before they’re gone. And on 3/6/2018, the actual date of the movie’s release, the sweater is 20% off. We never do this! So get yours now–here.

Because some things just get better with age.

One thought on “Happy Birthday to The Big Lebowski – wearing the Westerley sweater for 20 years, Dude”