Ed. Note: It’s National Park Week, and in the spirit of outdoor adventures, we’re sharing excerpts from a post by our friend Greg Hatten of Wooden Boat Adventures fame. He  took a trip into the snowy Wallowa Mountains this spring (or what’s passing for spring here in Oregon), and experienced nowcats, fly-fishing, Pendleton blankets, hot beverages and lobster tails. Read on below.

Six hundred pounds of Oregon Elk thundered up the small freestone creek in a desperate dash for life as a pack of gray wolves gave chase. In a final powerful move to avoid the wolves at her heels, she wheeled left and attempted to jump up the six foot bank from the bottom of the creek bed. Her fate was sealed when her front legs sunk to her shoulders in four feet of deep snow. The trailing wolves, running lightly on a thin layer of crust, caught her quickly and ended the struggle for life at the top of the bank in a flurry of fangs and flesh.

It was a solemn moment in the middle of a remote area that had taken us several hours and a variety of vehicles to reach. Our destination was a cabin by the river…We reached the little cabin, started a fire, unloaded gear, and propped our wet boots by the stove to dry out.

Clearly this was going to be a steelhead trip to remember… but the Pendleton Whisky after dinner would challenge us to recall the details.

… was clear and crisp. I slipped on my waders, slipped out the cabin door and hiked to the pools upstream. 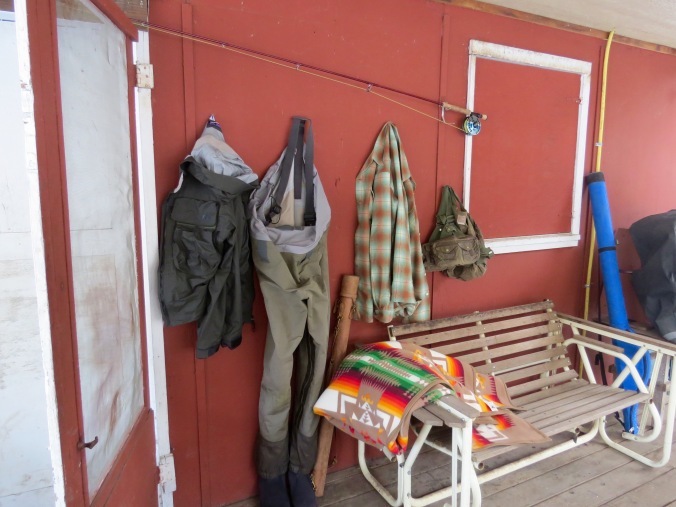 We fished hard all day – upstream, downstream, swinging, nymphing, plunking….. we tried it all with the same result. A fishless day – not at all uncommon or unfamiliar to steelhead fishermen…. and so, we headed to the cabin for ribs and lobster.

After another elegant dinner I grabbed my Therm-a-Rest cot, my sleeping bag, and my Pendleton blanket and headed for the river to do some open air winter sleeping down by the river. 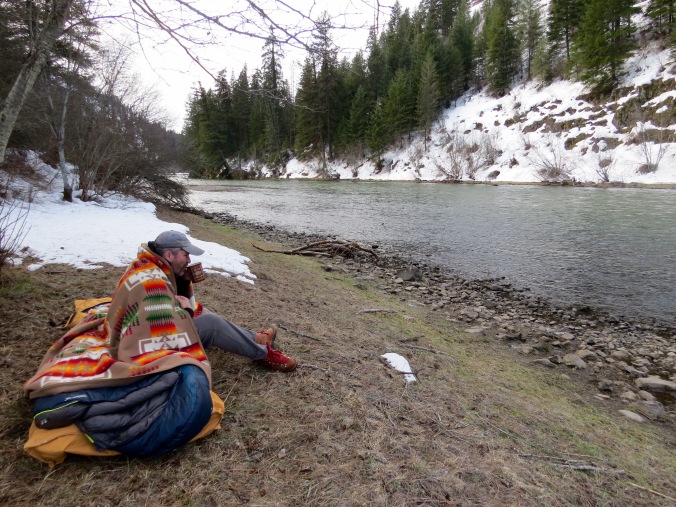 I explained it as a field test for winter gear – but I really wanted a closer connection to the river, the valley and the Nez Perce tribe of Native Americans that called this place “home” more than two hundred and fifty years before us. I looked up at the stars in the night sky and thought of them in this place.

My breath was heavy and my nose was cold but the familiar sound of running water over rocks and the rawness of the night was something I’ll never forget. The image of the slaughtered Elk was something else I’ll never forget and a few times during the night imagined I was being surrounded by the Minam pack of wolves that patrols this valley and did my best to snore loudly hoping to be mistaken for a hibernating bear. When I woke to the first light of dawn, I was pretty glad I hadn’t been eaten by wolves and figured either they thought I was a sleeping bear, a mad dog, or a middle aged fly fisherman that wouldn’t taste very good…. or maybe the wolf pack was only in my dreams. I hiked up to the cabin and made coffee.

…it was time to pack up and leave the valley. We made our way back up the steep narrow trail and near the top we stopped for one final look down at the river snaking it’s way between the mountains of the Eagle Cap Wilderness.

In 1877, 800 members of the Nez Perce tribe and their 2,000 horses fled the valley and headed Northeast in a desperate attempt to elude the pursuers hot on their trail. They were searching for a new home and chased by the U.S. army for over 1,000 miles and three months across Idaho and parts of Montana before a final bloody battle less than 40 miles from the safety of Canada. It was the battle in the foothills of the Bear’s Paw Mountains where the Nez Perce were finally forced to surrender and Chief Joseph is said to have pronounced to the remaining Chiefs and the U.S. Army “Hear me, my chiefs! I am tired. My heart is sick and sad. From where the sun now stands, I will fight no more forever.”

As I looked over the raw beauty of the Wallowa valley with the steep dark green Mountains on all sides dusted with a fine layer of white snow tumbling into the river below, his words took on a depth that made me ache for his people and the way of life they gave up. I was moved by the Wallowas.

Read the full post here: Moved by the Wallowas 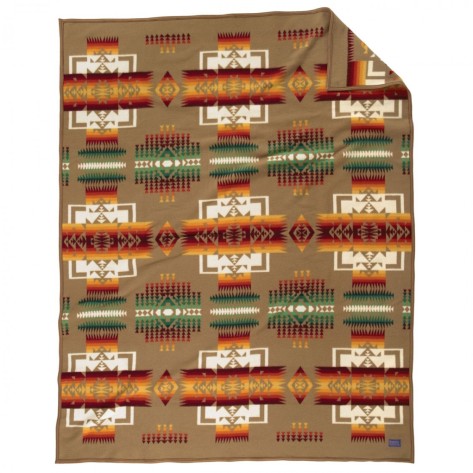