We’re pleased to announce the opening of our newest store in Milwaukee, Winsconsin’s historic Third Ward.

We will throw open the doors (or roll them up, this is a firehouse after all) on Labor Day weekend to welcome visitors into a flagship store that celebrates Pendleton’s history with special fixtures, visuals and merchandise. You’re going to love our mix of women’s casual, men’s heritage, blankets and special brands.

Grand opening details are below. We’ll celebrate our opening with a weaving demonstration by fiber artist Susan Buss. Susan is a fiber artist who has been featured on Martha Stewart. She’s been chronicling her prep for the demo, and will bring the process of weaving wool to life for you when you stop by. We have gifts, we have special offers, and we have our special lines, The Portland Collection and Thomas Kay.

Do we sound excited? We are excited. We can’t wait to invite you in. And what better doors to open than those of the Ward’s firehouse? 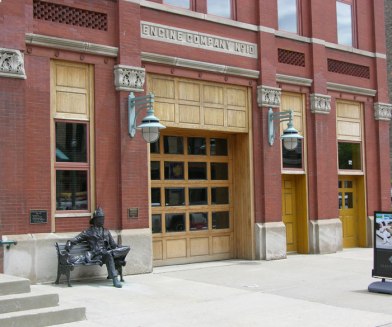 The firehouse in which we’re located was restored to its former glory after the Third Ward fire.  The bronze statue out front captures a firefighter and his faithful companion waiting for the next bell. This is just one of the historic buildings in a fascinating American neighborhood that actually began as an urban swamp drained in the early 1900s by the Irish immigrant community.  They built homes, wharves, warehouses, rendering plants,  shipping house and more. The railroad came through in 1856, helping to form a trade route from Lake Michigan to the West.

The Ward was thriving in 1852 when a fire started in the Water Street Union Oil & Paint Company.  Fanned by 50 mph winds, the neighborhood ignited. Help came from as far away as Chicago and Oshkosh, but 440 buildings burned and 1900 people (mostly Irish families) were left homeless. This drastic fire accounts for the cohesive look of the Third Ward. Milwaukee’s leading architects came together to redesign the commercial buildings. Many stonemasons and bricklayers were needed during the 35 years of reconstruction. Italian immigrants skilled in these trades settled the neighborhood and by 1915, the neighborhood had transformed into a predominantly (and proudly) Italian community.

The Historic Third Ward was built on rail and water trade, and its fortunes rose and fell with those transport methods. The birth of the American freeway system and growth of the trucking industry led to the Ward’s decline.

By the 1970s, the neighborhood was neglected and embattled, with an unclear future. Milwaukee rallied around this historic district, and began the long road to reclamation. In the 1990s, the Third Ward stepped up the renewal plan with streetscapes, parking structures and a riverwalk. Today, the neighborhood is a marriage of historic buildings and modern planning.

With its public market, lofts, galleries, theaters and restaurants, the neighborhood’s renaissance is ongoing. Pendleton is proud to be part of it.

The grand opening starts 8/30/13. Come see for these special events:

– Discover The Portland Collection for Fall 2013